A heterocyclic compound is an organic compound in which one or more of the carbon atoms in the backbone of the molecule has been replaced by an atom other than carbon. Los heteroátomos típicos incluyen nitrógeno, oxígeno y azufre. Of this group, those that obey Hückel's rule are called aromatics.

Heterocycles with 6 atoms and 6 electrons π

Fully unsaturated 6-membered heterocycles can be considered as a benzene molecule in which one or more carbon atoms have been replaced by a heteroatom.

Pyridine (or azabenzene) is the simplest of these compounds, with one nitrogen atom in the ring.

Like benzene, pyridine is planar, and the only structural difference with benzene is the distortion caused by the shorter distance C—N than that of the C-C bond. 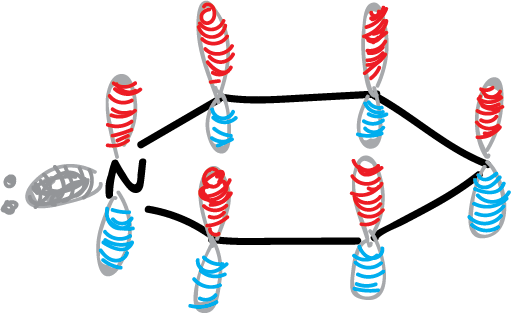 It can be represented by a cyclic structure consisting of 5 carbon atoms sp2 to each of which is bonded a hydrogen, and a nitrogen atom sp2.

Each of the 6 atoms in the ring has an p orbital orthogonal to the plane of the ring. It has a structure similar to benzene.

A complete cycle of p orbitals with 6 electrons, but differs in that it has an unshared pair of electrons from nitrogen in the plane of the ring.

Like benzene, pyridine can be represented by two Kekulé resonant structures.

In the Hückel approach, the electrons in the p orbitals are treated independently of those forming the σ bonds in the plane of the ring.

The 6 p orbitals combine to give 6 delocalized π molecular orbitals each of which can contain a maximum of 2 electrons.

Benzene, pyridine, and other analogs with 6 π electrons obey the Hückel rule when n = 1, so they are classified as aromatic molecules.

When we plot the π orbitals of benzene and pyridine, it is observed that the size of the circles roughly indicates the relative coefficients of the orbitals, and the red and blue circles indicate the opposite phases of the wave functions.

The orbitals of pyridine are similar to benzene but there are two notable differences:

The relationship between the structure of benzene and that of pyridine also applies to other six-membered conjugated ring systems with more than one nitrogen atom. In the pyridine and related heterocycles there is lower electron density π on the carbon atoms of the ring compared to the benzene. This is especially noticeable at the ortho and para positions. 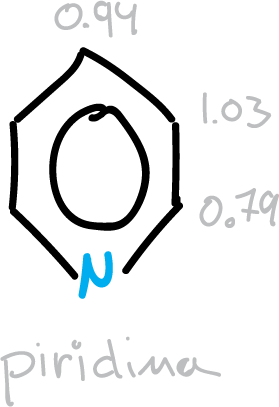 For this reason these heterocycles are called π-deficient heterocyclic compounds. The only atom other than nitrogen in the first row of the periodic table that can replace the CH group of benzene in an uncharged aromatic heterocycle is boron.

Borabenzenes, despite their very simple structure and the strength of the B—C bond, have not been isolated in the free state (without a donor ligand on the boron atom) because they are powerful Lewis acids.

Some of its complexes have been prepared and 1H-boratobenzene, which is similar to benzene but charged, has been isolated as a lithium salt. On the other hand, uncharged aromatic heterocycles can also incorporate atoms such as silicon, phosphorus, arsenic, and of the second or subsequent row in groups 14 and 15.

In addition, other group 16 heterocycles, including oxygen, sulfur, selenium and tellurium, can be included in the positively charged species.

Heterocycles with 5 atoms and 6 electrons π

Unsaturated planar heterocycles containing 5 atoms can be considered aromatic if they contain 6 electrons.

There is no analogous carbocycle other than the cyclopentadienyl anion.

This molecule has a symmetrical pentagon structure with 5 carbon atoms with sp2 hybridization and a cyclic set of 5 p orbitals with 6 electrons.

If we consider pyrrole, it can be an example of a 5-membered aromatic heterocycle. Pyrrole is a planar molecule, which indicates that the nitrogen atom has sp2 hybridization. Furthermore, the 3 σ bonds of nitrogen are located in the molecular plane, and the p orbital, oriented orthogonally to the molecular plane, contains the unshared electron pair.

The p orbitals give rise to π clouds above and below the plane of the ring. They are formed by the p orbitals of the carbons and that of nitrogen. It is a cloud derived from 5 p orbitals, but containing 6 σ orbitals (nitrogen with 2). It therefore satisfies Hückel's rule of 4n + 2, when n = 1.

The electron pair of nitrogen is involved in the formation of the π-electron cloud. Therefore, this leads to a lower basicity of pyrrole compared to pyridine. The molecular orbitals of pyrrole could be represented as follows:

It manifests itself in the splitting of the π2 and π3 orbitals, with π2, which is located on nitrogen, being the lowest energy orbital.

The calculated p electron distribution in pyrrole shows that the ring system is electron rich (6 electrons in 5 atoms). In addition, it is observed that carbon atoms have a higher electron density in π than in benzene. Although this density is higher in nitrogen. Therefore, due to their higher electron density π in carbon, compared to benzene, they are called π-excedent heterocyclic compounds.

The 5-membered aromatic heterocycle group is much larger than the 6-membered group because one of the atoms in the ring may be divalent and thus other heteroatoms, such as oxygen or sulfur (e.g., furan or thiophene), may be present.

Furthermore, for these derivatives it is possible to construct neutral aromatic heterocycles by replacing one CH with a nitrogen. However, those containing additional nitrogen atoms to the carbons become increasingly deficient in π  electrons as the number of nitrogens increases.

Compounds with structures in which a benzene ring is fused to another aromatic ring retain their aromatic properties although somewhat modified. 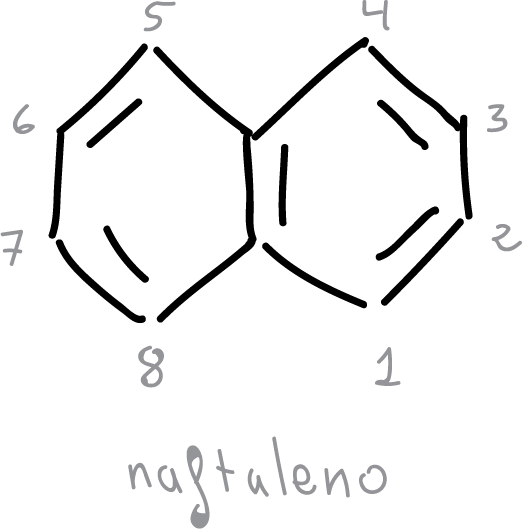 Similarly, when a heterocycle is fused to a benzene ring, the system is classified as aromatic. Thus, we find the 6-membered nitrogen-fused compounds, such as azanaphthalenes:

These compounds, such as naphthalene, show an alternation of bond lengths that is consistent with Kekulé structures.

Another series of benzofused compounds would be formed by fused 5-membered heterocycles.

Estos también presentan un alto grado de aromaticidad. In contrast, those in which the heterocycle binds to benzene through the C3—C4 bond, which is the longest of the C—C bonds, have a much lower degree of aromaticity, such as the heterocycles in the figure.

There is, as detailed below, a great variety of heterocycles fused to structures other than benzene. Thus, some of them are very relevant as for example the case of purine.

Antiaromatic systems are defined as conjugated cyclic systems that are thermodynamically less stable than the corresponding cyclic analogs.

Both the cation and anion of cyclooctatetraene are planar and are aromatic because they have 6e- and 10e- (Hückel's rule 4n+2), respectively.

For 6-membered heterocycles, this intermediate value is close to the relational values, always considering the perturbation caused by the heteroatom.

Different structural indices of aromaticity have been proposed as a function of bond distances that can quantify aromaticity in molecules. In the figure, data for different heterocycles are summarized. 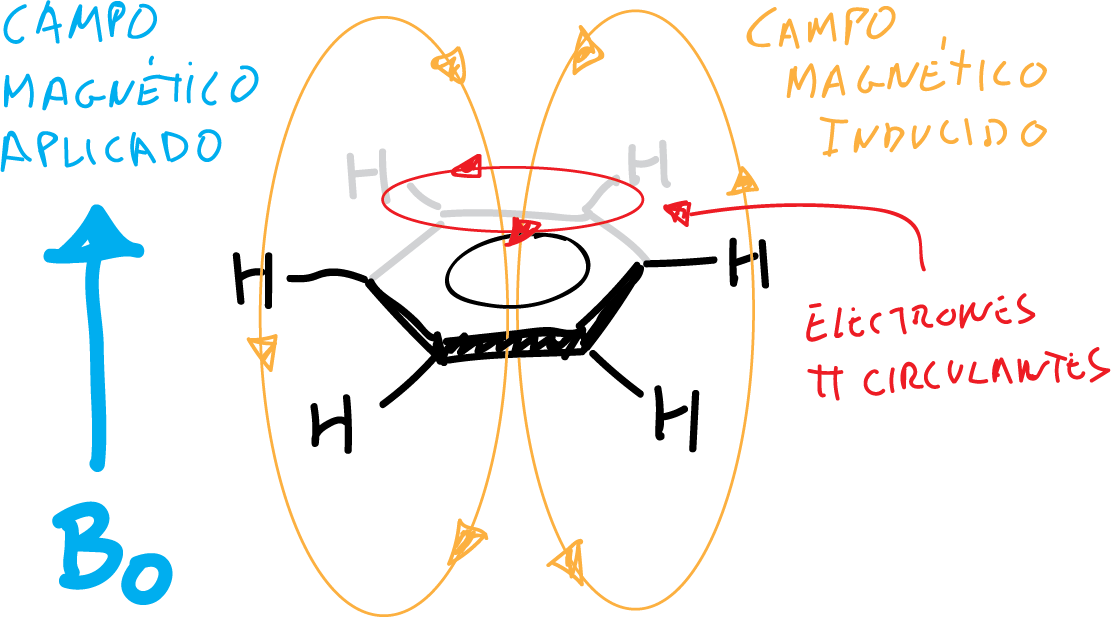 This does not occur in antiaromatic compounds, and therefore the aromaticity of a carbocycle can be measured by its NMR data.

A summary of the values of the chemical shifts (δH) of the heterocycles is presented in the following figure. The effect of the diamagnetic current, as can be seen is more qualitative than quantitative. A decreasing current is observed in the following order: benzene pyridine > thiophene > pyrrole > furan.

The delocalization energy in pyridine and other benzenoid rings is the same as that of benzene, if the perturbation caused by the exchange of CH for nitrogen is not considered. Thus, they are progressively lower for other heterocycles: quinoline, pyrimidine, pyrrole and thiophene. 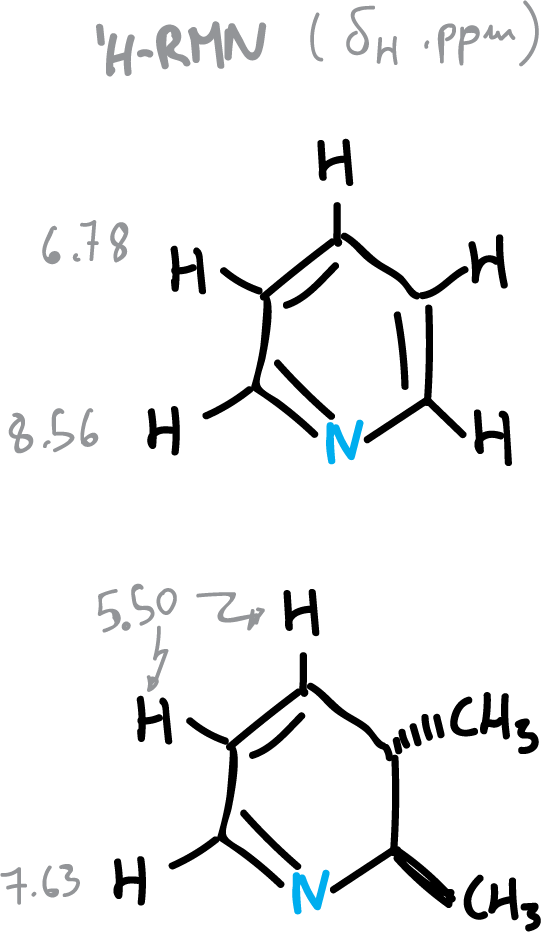 Aromatic character and other types of unsaturated heterocycles

Many heterocycles obeying Hückel's rule have been synthesized in unsaturated monocyclic systems. Thus, the heterocycle, usually nitrogenous, can form part of a double bond, as in pyridine, or donate a pair of electrons to the π system, as in pyrrole.

For heterocycles of the type:

we would be in the limiting case, but there is no evidence that a planar cyclic structure having 6 π electrons is favored in such compounds.

Ozone, for example, is not cyclic and some triaziridine that has been isolated reverts rapidly to the open form. The results of OM calculations indicate pyramidal nitrogen and cyclic structures with higher energies than for the linear forms.

In 4-member systems of the type:

only the dithiote has been isolated:

and there is no certainty that the ring is aromatic. 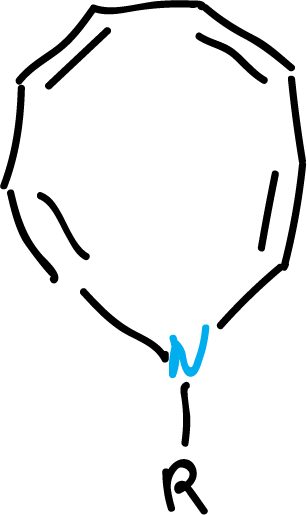 Despite the strain, both compounds appear to be flat enough to support an annular current unless the substituents (-R) are strongly electron withdrawing.

In this case, the structures will not be planar, due to a higher localization, of the electron pairs, on the heteroatoms, when -R is electron-withdrawing.

A third type of structure is one containing two transoidal double bonds joined by a methylene bridge. The system is shown in figure.

They can be considered aromatic, according to bond length criteria and their 1H NMR spectra.

However, there are still some larger aza-anulenes containing 14 π or 18 π electrons. Their aromaticity has been revealed by their 1H NMR spectra.

There are also some fused heterocycles other than benzofused ones that show signs of cyclic delocalization. Indolizine, for example, shows considerable resonance energy, 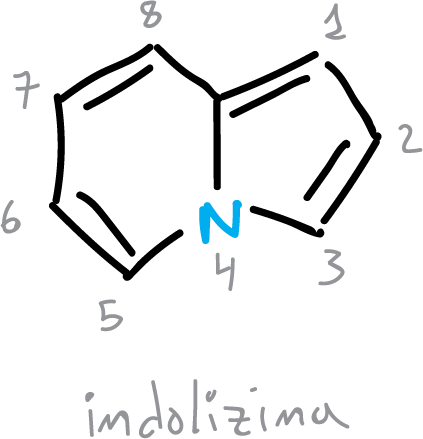 In addition, the heterocycle pyrroloindolizine (pyrrolo[2,1,5,cd]indolizine) also shows electron delocalization on the 3 rings. 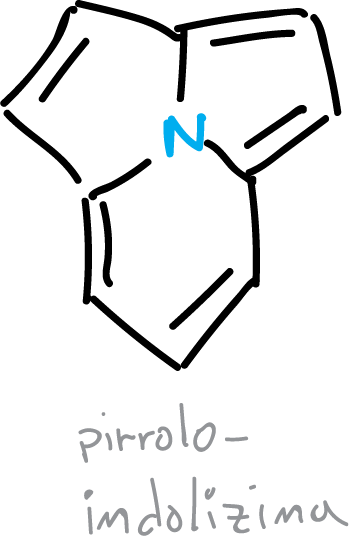 Many heteroaromatic compounds can exist in two or more tautomeric forms. The most typical example is the pyridines which have a hydroxyl or amine substituent at the α position. Then, the hydroxyl or one of the amine protons can be located either on the heteroatom or on the heterocycle.

Equilibria are usually established in solution, by rapid proton transfer. 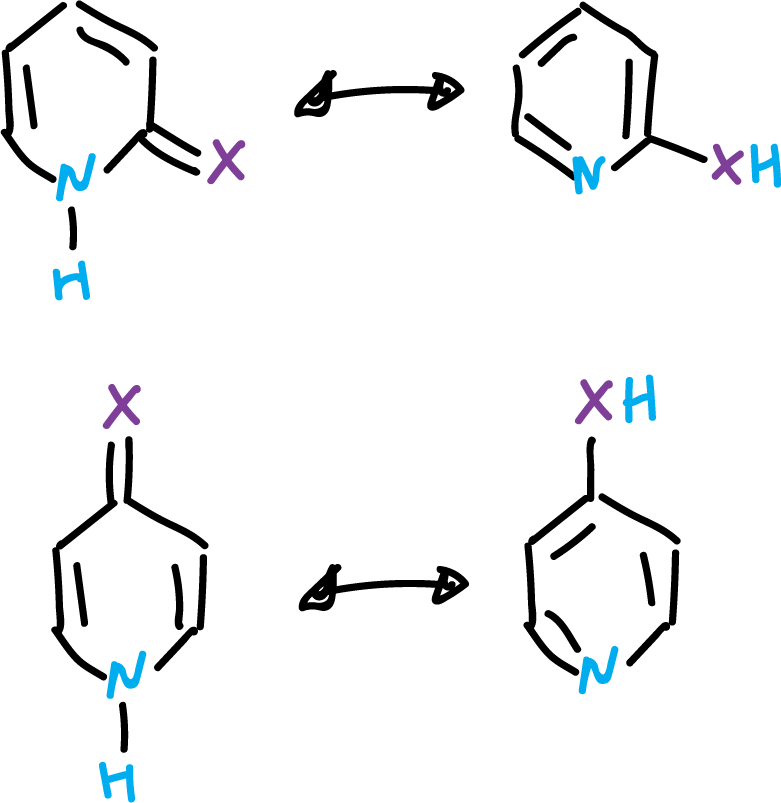 These equilibria are of particular importance in pyrimidine and purine derivatives, because they are part of nucleic acids.

If a tautomer is predominant in solution, its structure is usually represented as such, and this is detected by comparison of its spectroscopic data with its alkylated derivatives.

The spectroscopic data of 2-pyridone are very close to those of N-methyl-2-pyridone.

Chemical shifts of nitrogens in (15N-RMN) are often used to assign the preferred structure of a tautomeric equilibrium.

In another example, pyrazine-2-thione, exists (according to 15N-RMN shift data) as shown in the figure, 97 % as 2-thione.

Polar solvents can shift equilibria, as the tautomers are solvated differently.

Tautomers generally differ in polarity and in their ability to form hydrogen bonds with the solvent. However, it should be clarified that chemical reactions do not necessarily take place on the predominant structure of a mixture of tautomers. Particularly if proton transfer occurs rapidly.

There are other types of tautomerism (e.g., the first 3-hydroxy-pyrimidine ↔ pyrimidinium oxide equilibrium) in aromatic heterocycles collected in the following scheme: