Linear alkanes are the simplest organic compounds from the structural point of view.

They are formed by unbranched chains of carbon atoms, with their respective hydrogens, linked by single bonds.

They are named by prefixing a Greek prefix indicating the number of carbons (see Table-A1 in the Appendix) with the suffix -ane (recommendation A-1.1). Some common names applicable only to hydrocarbons without substituents are retained (recommendation A-2.1). Monovalent radicals derived from alkanes are named by replacing the termination -ane by -yl (recommendation A-1.2) and are numbered starting from the carbon attached to the main chain which is taken as carbon 1.

Also, some common names of radicals (recommendation A-2.25) are retained and are shown in the figure together with the systematic name in parentheses, and in the table. They are named on the basis of the carbon chain with the highest number of carbon atoms. Branches are considered as substituents. The positions of the substituents are indicated with Arabic numerals by means of locators (recommendation A-2.2).

To correctly name branched alkanes, it is convenient to follow the steps below:

The simplest cyclic alkanes consist of a single cycle (monocyclic). They are named by prefixing the cyclo- prefix to the name of the acyclic alkane with the same number of carbon atoms (recommendation A-11.1) (see Table-1 in the Appendix). Monovalent radicals derived from cycloalkanes are named by the -yl termination, with carbon number 1 being the one attached to the main chain (recommendation A-11.2).

In substituted cycloalkanes the same 3rd-step of branched alkanes is followed to assign the lowest locator combination.

They are multi-ring systems and are further subdivided into three families of compounds:

They are systems of two or more cycles joined by a single (the simplest) or double bond.

The smaller ring is named as a radical ending in the name of the larger one (if it has substituents, these are ordered alphabetically as in branched alkanes). If the rings are the same, number the bridging carbons 1 and 1′, prefixing the bi- prefix to the ring name in parentheses (recommendation A-51). They are bicyclic compounds with a carbon atom common to both rings.

The simplest case is obtained when two rings are joined by a spiranic carbon. They are named with the prefix spiro- and using as suffix the linear alkane with the number of carbons equal to that of the system. Between the prefix and suffix, two numbers are specified in square brackets and separated by a dot, indicating the number of carbons in increasing order that are attached to the [n.m] spiranic carbon (recommendation A-41).

Rings sharing more than one carbon

They are polycyclic hydrocarbons with two or more carbon atoms common to two or more rings. These carbons are called bridgeheads.

The simplest case corresponds to bicycles. In this case, the name is constructed with the prefix bicyclo-, followed by 3 numbers in square brackets and in decreasing order. These numbers indicate how many carbon atoms are connected to the common vertices of the rings (in the following figure these carbons are highlighted). Finally, the name is terminated with the suffix of the linear alkane with the same number of carbons as the system (recommendation A-31.1).

It should be mentioned that some common names are also preserved and are indicated in parentheses in the following figure: In addition, it should be noted that some non-systematic names have been retained, such as those shown in the figure: 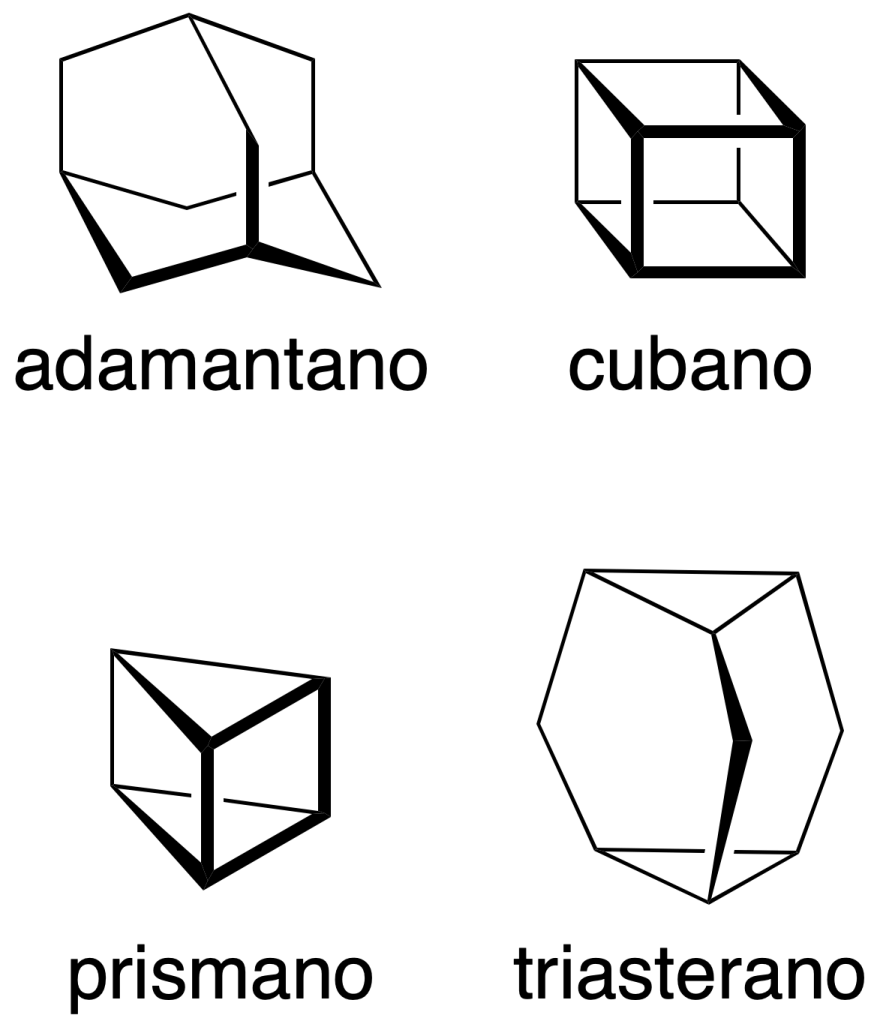